Yes, we are playing The Elder Scrolls II: Daggerfall 😀

First off, everyone is very tall…

…well, fine, and Bretons too if you insist—maybe part of that Altmer half-elven ancestry.

Altmer of course are tall, High Elves and all.

Oh, ok, so Dunmer are tall too? Hadn;t really thought of that specifically, but sure why not? 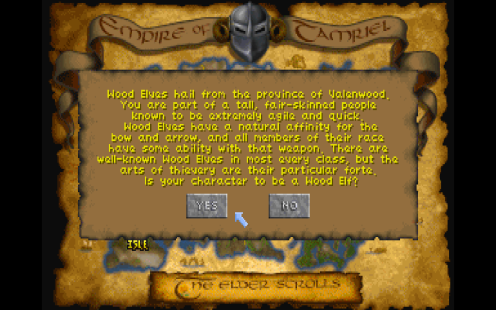 Ok but HOLD ONE A SECOND HERE. Bosmer are a “tall people”? Wow, they got injections of growth hormones or something in the 700 or so years since the Planemeld! 😉

Nice to see the origins of Argonians being fast swimmers as a racial trait. I always thought that was a nice touch in ESO, no matter what the humorless min-maxers said.

Desert folk are apparently best described by the adjective, “hardy”— 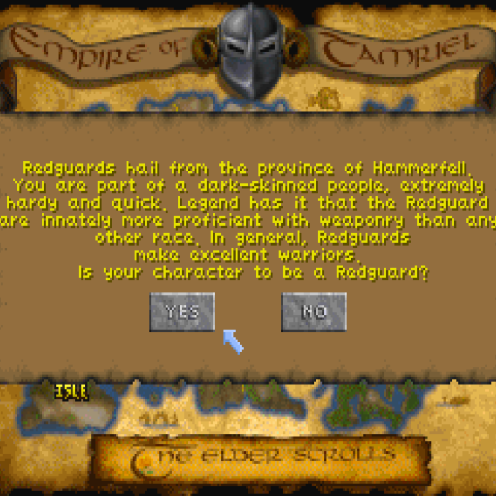 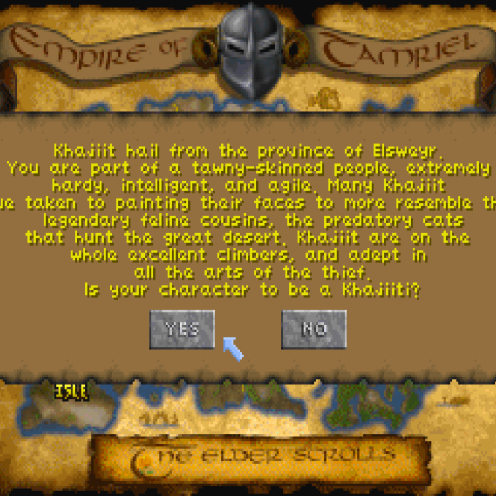 WAIT!! Hold on just one second here! The Khajiit are a “tawny-skinned people” [my emphasis] and “[m]any Khajiit have taken to painting their faces to more resemble their legendary feline cousins, the predatory cats that hunt the great desert.” WHAT? Wow, that’s an amazing development of lore in the game there, that we went from face-painting cat-lovers to humanoid cat-people in the course of a few games?

Well actually this is part of the lore where there are 17 different breeds of Khajiit, depending upon the phases and influences of the two moons at the time of birth. So we are actually seeing and playing different Khajiit breeds in the earlier games (ones that are more Man- or Mer-like) than in the chronologically later games (Oblivion and Skyrim) or in Elder Scrolls Online which is taking place in the 2nd Era, and also much closer to the Khajiiti homeland of Elsweyr.

(And of course we are probably also witnessing the creation of said lore, the wonderful way that the textures of a world deepen with richness as a series develops over time: in Arena and Daggerfall the Khajiit were probably meant to be more cat-like (with legendary ancestry) than explcitly one of the beast-people of Tamriel. As those ideas changed in later games, the lore was fleshed out to allow for all visions and versions of the Khajiiti.)

Since the Bosmer generally hold Most Favored Nation status in my book, I decided to be an (oddly tall) Wood Elf, and a Nightblade as well (because I am addicted to that NB goodness!)

Funny, I had forgotten but this reminded me how the Nightingales in the classless Skyrim really are the more traditional TES Nightblade class, blending stealth with the Illusion school of magic.

And, a name in keeping with my Nightblade-cum-Leiber tradition:

(Also, when determining past history and influence for the character the game asked me a question about her childhood nickname. I picked “Rabbit,” and so it only made sense that this might be her adult nom de guerre.) 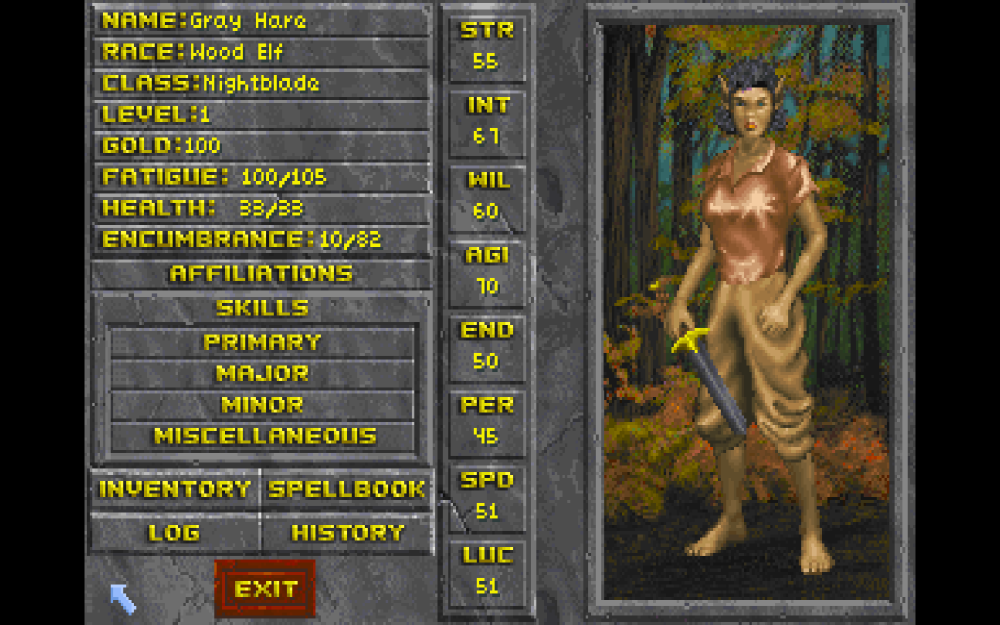 The adventure shall continue…

P.S. playing Daggerfall is made possible by the generosity of Bethesda in releasing the DOS game for all to play (thank you!) and this awesome app Boxer which is a beautiful and painless DOS emulator that runs on a Mac.

FYI, you can also download TES I: Arena for free from Bethesda’s site. If you try to drag and drop it into Boxer.app like you can with Daggerfall, it will give you an error along the lines of “This is a Windows program, but Boxer is a DOS emulator. You need a Windows emulator.” Actually, this is just some odd thing that Bethesda did with the app; it says it’s an .exe but is actually a .rar file. Just drop the Arena106.exe file onto your favorite RAR extractor (I like The Unarchiver myself) and it’ll give you a new folder called ARENA. Now drop that folder into Boxer.app and you are gtg. [Thank you to this forum post for figuring that out!]