Thessaly’s look has really evolved, especially in the past few months since the dye stations were added in Update 3, which increased my ability to customize her dramatically.

I’ve taken great pleasure in finding unexpected or striking color palettes to go with interesting combinations of racial motifs in the armor and weapons themselves. Hopefully all combining nicely, and a little differently each time. And always following the A Number 1 Prime Directive Thou Shall Not Pass! Rule: do not make it look like that candy cane outlined-like-Tron-bodysuits armor from WoW. Barf. O. Rama.

When last we met our heroine, she was wearing a modest but practical set of plate and mail in a steel and charcoal palette—i.e. lots of grey metal. But then I got a quest reward breastplate with better stats than what we were wearing, and decided to switch her up. Imagine my surprise when, upon doning the armor, I discovered that it was a lots less “practical” (or modest) than our previous tin can. Turns out it was Orcish in motif, and apparently in Orsinium they take the term “breastplate” quite, ahem, literally.

Embracing the decolletage (nice chance to show off our ink) we went straight to the newly-added dye stations to whip us up some fanciness!

Gold and red with some green/verdigris accents; this would be something of a theme for Thessaly for the next little bit. And we were still sporting our goblin horns on the helmet (and continuing the Primal style on out sword, board and belt.) However, big changes were coming, along with a chance to empty some gear from deep storage on the mule… 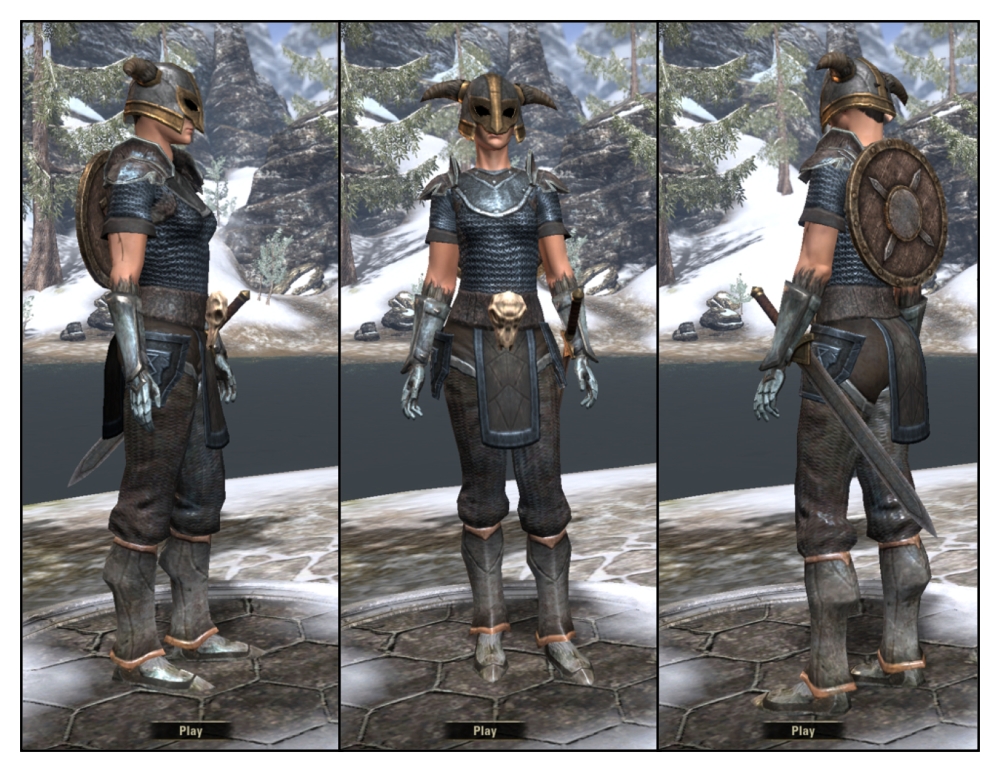 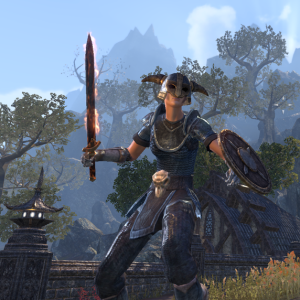 At level 19 I was able to start using the Akaviri Dragonguard dropped set which I have been hoarding since god only knows when—definitely since Symmetry was this level. I was also still getting the hang of the dye stations, and playing around. I decided to go back to a more conservative, multi-shade grey steel look, with some brown accents.

Later (but while still level 19) I swerved back to using a bit more color, playing around again with my greens and golds. I liked this, and decided to keep going down that path—especially when I leveled up to 20 and was able to add some new Akaviri (and other) gear to the mix.

The level 20 version of the Akaviri Dragonguard chest and legs just had a lot more visual detail (actually it increased with each level, something that really impressed me in terms of the overall design of the gear in the game) and I thought it interacted very nicely with the options at the dye station. My first pass was a black-and-gold theme, but taking particular care that the gold be a variety of golds and bronzes and browns. Similarly, the blacks are varying shades of dark grey (I actually don’t have a true, deep black yet; stay tuned!) It was a nice enough look, but I was obsessing a bit and turning around color schemes pretty fast.

My first pass at this idea kind of came about by accident, just as I was playing with colors. I might even have been joking around, trying to make a horrible color combo in response to some hideous toon wandering by in the background, but then ended up with the beginnings of something lovely instead. 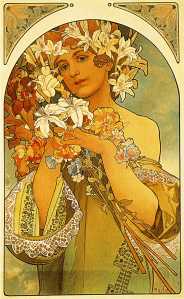 I was thinking of the color palettes of some Art Nouveau artists, especially Alfonse Mucha, and the way they used greens with orange, copper, gold and reds in such an interesting way. Additionally, it was autumn here in New England, where the half-turned trees create real-life Art Nouveau fantasias every day—well, for a few weeks, until the winds descend, rip the leaves off the trees, and plunge us into winter 😀

Version 1 was in retrospect a little too coppery, a little too blue-tinted green, a little too much all the same. But I was pretty damn pleased with the second version of my Autumn Warrior: she has a lot of subtle variation, with each piece being a combination of different, but similar, colors in a unified but complex palette.

This was pretty fierce, my new level 28 gear. I wanted to use the Argonian motif (I was in Shadowfen) but hoped to find a way to blend it nicely with another motif or motifs.

I ended up with a Barbaric-style helmet over an Imperial chest. The Argonian style for my shoulders, hands, legs and feet. Back to Barbaric for a medium belt (I had some skill points to spare, and was craving a bit of added stamina regen which I could get as a passive on medium armor).

At the dye station I ended up with a gold-and-brown base (Craftmaster-, Hlaalu-, and Hunding Golds), punctuated by metallic turquoise and teal (Doomcrag Verdigris for the torso, Jute- and Vine Greens for some accents on helm and pauldrons). I was lucky that the Khajiit shield was perfectly in the palette since we still can’t dye those—soon, though, I hope!

I was pretty damn pleased with this look, I have to admit, and it made it easier for me to give up my precious Akaviri Dragonguard set that I had been so enjoying…

Level 32, time for something new!

Well, mainly new in the dye job, I was pretty happy overall with my motif choices and decided to more or less stick with them.

I swapped out my Barbaric horned helm for the skulltastic Bosmer heavy helm.

In the successful wake of the medium armor belt for level 28, I decided to add a piece of light armor for the magicka regen perks, which would still leave me with 5 heavy armor pieces for the passives based on having a full set of heavy. So I switched my medium belt for a Barbaric (light) sash, and did medium hands (to keep the stamina regeneration passive) in the Argonian style.

For weapons, I chose an Argonian staff (for my continued sojourn in Shadowfen, plus at this level it sort of reminds me of the Staff of Ra from Raiders and I liked that. The Khajiiti board was serving me well, and I decided to trade in the sword for a crescent axe also in the Elsweyr style.

THE SHADOW OF EASTMARCH

And here we are at level 38; I had meant to make a new set at 36 but got caught up in the game and forgot. Oops. But maybe it was for the best that way, since it gave us time to get another crafting perk under Symmetry’s belt so she could learn the Ancient Elf motif, which I used as the inspiration for this radically new look. However, I discovered that I wasn’t always such a fan of Ancient Elf heavy armor, but the regular plain jane Altmer style was looking pretty good at the higher levels, actually!

Final mix: a heavy armor Argonian “crown” (in honor of finishing Shadowfen!) over Altmer chest, legs, and feet. Ancient Elf shoulders and medium bracers for the hands, and I kept with the Barbaric light armor sash for the waist. I’ve always loved the Bosmer staves and think they only get better with higher levels so I crafted one of those for my secondary set, then a one-handed axe in the Nord style, in honor of my arrival in Eastmarch, first of two Skyrim zones (well, three actually if you count the starter isle of Bleakrock.)

And I am lucky enough to be the proud owner of a purple, level 36 shield in the new Dwemer motif (courtesy of my brother-in-law) which I will now hold onto way past it being at level parity with the rest of my gear, because, you know, it’s frickin’ awesome.

And that’s where I am right now. Thessaly is level 41 currently, and I’m planning on making new gear at 42. I’m still digging the “Shadow of Eastmarch” look but thinking of mixing it up a bit here and there. For example, I’m not the biggest fan of the medium bracers—I wish her hands looked stronger, bigger, with big mailed gauntlets arrrr! But on the other hand, I need a medium piece somewhere. So I have to think about that.

I did at one point try a little something out, had a piece from a dropped set or maybe it was a quest reward, in the Nord style (horns! 🙂 ) and I decided to put it on, dye it black, and see what I thought: Not too shabby! I love how the crazy width of the Nord horns match the crazy width of the Ancient Elf shoulders (normally I think that particular Nord helm in ESO is waaaaay too outbalanced and makes most toons look like Viking bobbleheads. But here I liked it!) Also, hard to see I know but she has some heavy gauntlets too and I like the way the hands look more here.

Not sure, however, about covering up her whole face. I’ve gotten used to seeing it with her weird Argonian crown.Also, I tried everything I could to make the horns of the helmet and the little skull of the sash be the same shade of white or off-white, to no avail. Not a dealbreaker, but I would’ve liked it a lot if I’d been able to manage it.

So, decisions to make, and soon. But that is the sartorial (armorial?) journey of The Witch of Thessaly, level 2 to 38. I’ll make Episode III when I hit Veteran rank 1, I suppose; I’m hoping to be able to do so before the Champion system lands with Update 6.